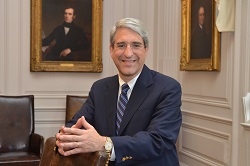 We are pleased to announce the final report of the Presidential Carbon Charge Task Force, which can be viewed online by clicking HERE. Since September 2014 this task force, chaired by Sterling Professor of Economics William Nordhaus, has examined whether it would be feasible and effective for Yale to institute an internal carbon pricing mechanism as part of the university’s sustainability efforts. The task force has concluded that the answer is yes.

Professor Nordhaus and his colleagues would like to use this opportunity to discuss the group’s findings in a session open to the Yale community, to be held at 5:00 p.m. on Wednesday, April 22, in the Luce Hall Auditorium. Wednesday also happens to be Earth Day, and we can think of no better way to reflect on how each of us can do our part to mitigate the threat of climate change. We encourage you to read the report of the task force, and to attend this open forum.

The task force has provided a blueprint for a novel university-wide carbon charge program. Its goal is to incentivize Yale to further reduce its carbon footprint in a way that is not administratively or economically burdensome. We look forward to piloting this concept in select units in the future, and to continued careful research and study as we consider potential wider implementation. We believe that this proposal can serve as a model for other institutions, expanding Yale’s role as a pioneer in researching, teaching, and designing innovative solutions to climate change.