What is Yale’s Carbon Charge? 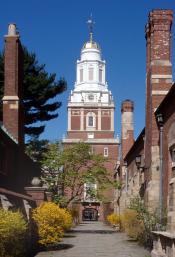 Role of the Carbon Charge

Yale recognizes climate change as a grand challenge of the twenty-first century.  In 2021, the university commited to emit no greenhouse gases from its campus by 2050, while redoubling its commitment to research and teaching that will help society accomplish its energy transition.  Reaching the goal of zero actual carbon emissions on campus requires the Yale community to use its buildings differently and to invest over $1 billion in the coming decades to retrofit buildings and change how we heat, cool, and power the campus.  Yale’s carbon charge, first implemented in July 2017, plays an important role in both means.  Managers receive information on building energy use along with a financial incentive to reduce consumption.  And by funding a portion of Yale’s new energy-related investments, determined by the amount of each building’s current emissions, building users support the decarbonization of Yale’s campus.

Every top-level administrative unit at Yale (for example, each school) is charged for each metric ton of carbon dioxide equivalent (MTCDE) its buildings are responsible for producing. Yale meters building electricity, chilled water, natural gas, and steam consumption and translates this consumption to MTCDE based on the carbon content of each utility.  The price per metric ton will grow from $20/MTCDE in fiscal year 2023 (FY23) to $35 in FY24 to $50 in FY25.  Yale will re-evaluate the rate periodically as our understanding of the social cost of carbon (SCC) evolves.  The FY25 amount of $50/MTCDE is in line with the White House’s interim estimates of the social cost of carbon of $51

The university’s 2021 commitment recognizes the central role for these large-scale projects and contemplates a 400-500% increase in the annual investment in such projects.  The new carbon charge provides one of multiple sources for this increased investment.  Since these investments have long lifespans (averaging more than 40 years) the carbon charge generated in any given year provides only a small portion of the total funding (estimated at approximately 10% of the total funds required).  The remainder will be financed alongside Yale’s other capital projects, with costs borne over the lifetime of the future occupants of campus.  The charge ensures that not all those costs fall on future generations.

Carbon pricing is a growing trend in the corporate world. Over 850 companies reported using an internal price on carbon in 2020 — up over 450% from 150 in 2014 — and the number is expected to rise, according to the Carbon Disclosure Project (CDP), an internationally recognized non-profit with the largest database of corporate emissions. To the best of our knowledge, Yale was the first institution of higher education to implement a comprehensive internal carbon-pricing program.

For more information about the Yale Carbon Charge, please contact us.