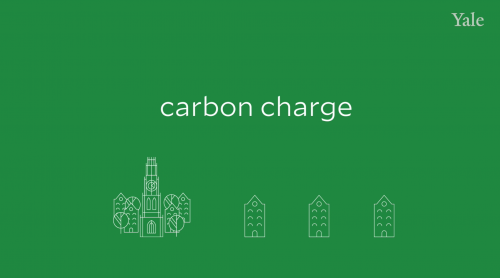 As reported by Jim Shelton from YaleNews:

After three years of study, discussion, and experimentation, Yale University has implemented a carbon charge that affects more than 250 buildings and nearly 70% of campus carbon dioxide emissions.

“As the first university to pilot-test a carbon charge program and the first university member of the Carbon Pricing Leadership Coalition, Yale is serving as a model for other communities and organizations,” said President Peter Salovey. “Yale’s carbon charge program is an important example of our commitment to curbing climate change and reducing greenhouse gas emissions, and it shows that research, scholarship, and teaching are at the heart of Yale’s environmental efforts.”

In 2014, Salovey outlined six sustainability initiatives for the university, including the creation of a task force to look into the feasibility of an internal carbon charge program. William Nordhaus, Yale’s Sterling Professor of Economics, chaired the task force, which recommended that Yale set a carbon charge at the social cost of carbon — estimated by the federal government to be $40 per ton of carbon dioxide.

Salovey and Provost Benjamin Polak approved a university carbon charge pilot program that tested four approaches to reducing carbon. The pilot ran from December 2015 to May 2016 and included 20 campus buildings.

“The pilot was a success,” said Casey Pickett, director of the Carbon Charge initiative. “It showed a charge is feasible, and according to a student model from the School of Forestry and Environmental Studies, buildings in the pilot saw a statistically significant emissions reduction.”

“This approach keeps the net amount that each unit is charged relatively small, while also, on the margin, giving everyone an incentive of nearly the full social cost of carbon,” Pickett said.

The revenue-neutral approach appears to be adaptable to a wide range of institutions, from universities and non-profit organizations to corporations and municipalities. Also, unlike carbon charge programs instituted by businesses, there are no proprietary concerns that prevent other institutions from seeing details of the Yale carbon charge in action.

“The Yale carbon charge is already serving as a blueprint for other organizations interested in internal carbon pricing,” said Kenneth Gillingham, an associate professor of economics at Yale. “It provides ground-truth details on both the complexities and advantages of running similar pricing schemes.”

The Yale Carbon Charge is an important component of the university’s overall emphasis on sustainability. Yale is committed to building a more sustainable world — integrating science, the humanities, and the community in order to create, test, and adopt innovative solutions to environmental and social challenges.

In support of this mission, Yale’s campus will be carbon neutral by 2050.

In 2016, Yale became the first university member of the Carbon Pricing Leadership Coalition (CPLC), a private-public partnership among the World Bank, International Monetary Fund, governments, nonprofits, and private sector companies to strengthen carbon-pricing policies by building a network for sharing best practices. With CPLC and the World Economic Forum, Yale has led a series of carbon pricing webinars that feature prominent companies, including Microsoft, Mahindra & Mahindra, and Royal DSM.

As the Yale carbon charge progresses through the academic year, university students, faculty, and staff will play a crucial role in determining its success. Sustainability and carbon reduction will continue to be embedded in daily activities, officials said, and building officials across campus will share best practices.

“The Presidential Task Force established a solid foundation of study and discussion about this, here at Yale,” Pickett said. “Now, thanks to thought leaders, researchers, and collaborators across the university, we are doing an experiment for the world and we’re sharing the results.”

Link to article on news.yale.edu